This guide will help you locate resources about Mental Health

Video 1 Why do we have a mental health act

Video 2 Who is the Mental Health Act for

Video 4 Practice implications of the Act's intent and provisions

RUOK Day - how to ask RUOK by   Deakin Life

This LibGuide contains links to third party sites which some users may find concerning. TAFE NSW is not responsible for the condition or the content of those sites as they are not under its control. If any third party content on this guide causes you concern or emotional distress please contact one of the free services below:

Latest resources on Mental Health - borrow now or ask for an interlibrary loan.

Changing minds - The Inside story

Changing minds: the inside story Series 2 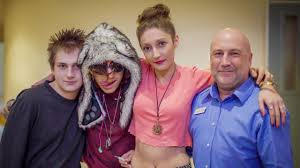 The series follows ten characters whose mental illnesses do not discriminate in age or social standing. They include Nicholas (aged 18), a bullied schoolboy who relieves his anxiety by self-harming; Taileah (20), a recently graduated nurse whose stress manifests in distressing auditory hallucinations; Nathan (24) whose schizophrenia allows him to chat with Hitler and Muhammad Ali; Fabrice (36), a barrister's son with persecutory delusions about demons and devils; and David (47) who believes he is Elvis Presley.